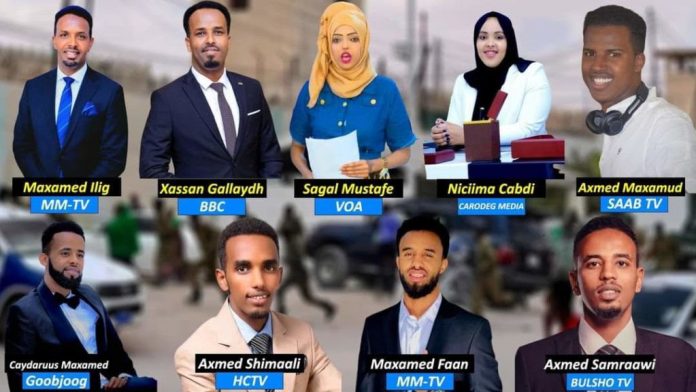 Late on Wednesday night police released Voice of America’s Sagal Mustafe Hassan and Naima Abdi Ahmed of Caro Edeg Media, according to colleagues and family members who spoke to SJS and SOMA. The reason of their release is not yet clear.

When contacted, Somaliland police and the Ministry of Information declined to speak on the journalists’ mass arrest. However, Head of the Somaliland Custodial Corps, Ahmed Awale told state television that they “would seek legal means against the journalists” who covered the prison incident.

SJS and SOMA strongly condemn the mass arrest of journalists in Hargeisa. While we welcome the freedom of Sagal Mustafe Hassan and Naima Abdi Ahmed, we also call Somaliland authorities to unconditionally free other group of journalists in jail including Abdisalan Ahmed Awad who is held incommunicado since 3 April 2022.

SJS and SOMA reiterate their call to Somaliland authorities that they must understand that journalism is not a crime and it is not a terrorism. It’s an important cornerstone of freedom and democracy. The attempt by Somaliland authorities to control news and information – particularly incidents with public interest – violate the guarantees enshrined in Somaliland Constitution and the international law, in particular, Article 19 of the International Covenant on Civil and Political Rights.

“We condemn this mass arrest of journalists in Hargeisa. Already into the fourth month of 2022, Somaliland leads the list as the worst journalists’ jailer among all other regional states. This spike in arrests of journalists in Somaliland shows an escalating crackdown on media freedom in that region,” Abdalle Ahmed Mumin, the Secretary-General of Somali Journalists Syndicate (SJS) said “Somaliland authorities must immediately and unconditionally release all detained journalists and stop intimidating journalists and media crew for carrying out their journalistic duties.”

“Arrests, repression, and intimidation of journalists have become commonplace in Somaliland. We are concerned that the situation is even became worse to an extend journalists are now telling us that they are not safe” Mohamed Osman Makaran, the Secretary-General of Somali Media Association (SOMA) said. “We demand that the perpetrators of these crimes be held accountable for their crimes against journalists and media outlets. We call all the journalists in detention be freed without condition.”

User Xogta Wararka - May 16, 2022 0
President Biden has signed an order authorizing the military to once again deploy hundreds of Special Operations forces inside Somalia — largely reversing the...

Reduction in US drone strikes in Somalia leads to fewer civilian...

The African Union and the Burundian army commented on the attack,...

ABOUT US
Newspaper is your news, entertainment, music fashion website. We provide you with the latest breaking news and videos straight from the entertainment industry.
Contact us: contact@yoursite.com
FOLLOW US
© Newspaper WordPress Theme by TagDiv
MORE STORIES